If you’re short on time, we recommend the Focusrite Scarlett 2i2 (3rd Gen)—it’s an excellent choice for beginners, teachers and more advanced players.

Once upon a time, you couldn’t make music on a basic computer; they’re not built for it and lack the inputs. They also lack the ability to appropriately process detailed sound signals being played and recorded in real-time.

Introducing—the USB audio interface. They bridge the divide between your instruments and computer, allowing you to compose, record and create music from the comfort of your own home studio.

Focusrite have many high-quality interfaces available, and the Scarlett 2i2 is no exception. You’re getting an incredible price for this useful tool, and tons of software that comes with it, including Pro-Tools.

It’s a USB audio interface for PC or Mac. Connectivity is also made easy with the two instrument inputs with separate controls. Each input has a gain dial and two sound options. The options are for the instruments to have a normal sound quality or a brighter and more open sound quality, with air mode.

You can also monitor the instruments directly on the audio interface. They don’t have a separate volume control, but listening to them separately is easily remedied by plugging one in at a time to listen. You can also adjust the gain to make them louder separately during monitoring.

The Scarlett 2i2 is very easy to use overall. It’s not too cluttered with features, everything is labeled clearly, and it won’t impose your workspace either.

It features two more inputs than the 2i2, and four outputs. It also has MIDI connectivity.

Like the 2i2, you can control the gain of the two front inputs individually. There are no controls or effects for the inputs on the back of the audio interface. However, the software bundle lets you add effects to each input, so the lack of onboard ability doesn’t leave you falling short.

Although it’s still a beginner pick, the 4i4 is well-suited to a more knowledgeable newbie with an eagerness to learn. Plus, it should stay working adequately, well after your beginner days are over.

The PreSonus Audiobox is the most customizable so far, and the most inexpensive; this makes for a great combination. On top of that, it’s highly durable and quite heavy for its size. So for a low price, you get a useful tool that’ll last and withstand the occasional bump.

It has two inputs, sufficient for beginners, and you can control the gain separately. There’s also a mixer dial for you to play with your sound further, plus two more dials.

Of course, you can listen back via your PC or Mac too. The audio interface is compatible with almost all recording software, making it easy to monitor and save your sounds.

You can monitor any MIDI keyboards via the audio interface, too. There are two MIDI inputs on the back for further connectivity and customization of your sound.

Then you can continue to play with this sound in the included digital audio workstation. On top of that, you get over 6 GB of third-party resources to enjoy, too. 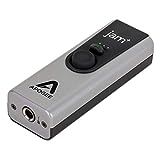 If you’re an Apple user looking for something exclusive for your software, you’re in luck. So far, we’ve had devices that connect to any computer. Here’s one specifically for Mac.

The Apogee Jam Plus is sleek and silver, like Apple products, so it blends right in. Its shape also makes it incredibly portable—great for recording on the go.

There’s only one input, but this gives it the ability to be so small and portable. And despite its compact size, it can still process high-quality studio sounds.

Yes, the sample rate is on the low side at 96 kilohertz per second, but it’s rapid and functional regardless.

It functions as a USB audio interface, rather than the Mac-exclusive Thunderbolt. The power input on the device has the classic Apple look, though.

This connection is right next to a regular ⅛-inch headphone output. You can monitor sound right from your audio interface; this is especially useful if you’re connecting it to newer iPhones as they don’t have a headphone jack.

And yes, it not only works with Macs but iPhones and iPads too, if you have the right adapter. Pair it with GarageBand, and you can make music even without a Mac present. 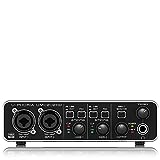 You can also monitor your sound best directly on the audio interface, further eliminating the need for a DAW. You’ll need a DAW to record, of course, but for practice purposes, it’s useable right out of the box.

Paying attention to different models is important because the U-Phoria UMC202HD audio interface gives you an excellent opportunity for growth.

As a beginner, you likely don’t need many inputs. One is fine, and two is better. But once you’ve mastered it and want to grow your skillset and upgrade your hardware, Berginger’s U-Phoria range lets you do just that.

Often you have to learn completely new audio interfaces when you upgrade—but this model has an 8-input version, too. It’s ready and waiting for when you bypass the beginner stage and should be as easy to use as your first audio interface was. 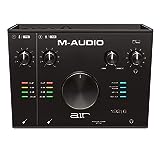 With M-Audio’s Air interface, not only are you getting the hardware but some premium software too. Pro-Tools and Ableton Live are used by professionals, so you’ll be a very lucky beginner.

Pair the pro-level software with the extremely low latency, and you have the best audio interface that you should adore.

Everything about this interface is high-quality, and there’s potential for growth too. The same model has a version with eight inputs, but as a beginner, you can stick to the two input version.

Something that stands out about the two regular inputs is that they’re not regular. They’re standard ¼-inch instrument inputs, but they double as XLR connections, too. So basically, you get two types of input of the same size, but taking up less space.

There are also ¼-inch outputs for speakers and studio headphones if you wish to monitor your sound directly on the interface.

What Is an Audio Interface?

We’re seeing more and more inexpensive home studio setups in modern music creation. The best audio interfaces help with this; they give you the ability to use professional equipment with your computer for recording.

For example, instead of using a USB microphone to record a guitar through an amp, you can record your guitar via the interface.

You also have the ability to use more professional, AUX connected microphones over USB ones.

How to Use Audio Interface

For the tech-savvy, these steps should be easy. For the less technically inclined, there are a few tutorials in your future.

What Is the Easiest Audio Interface to Use?

Most beginner audio interfaces will be simple to use. Out of our recommendations, the easiest to use is the Focusrite Scarlett 2i2 (3rd Gen). It has a very easy layout.

Which Audio Interface Is Best for Beginners?

The best audio interface for beginners depends on what you’re looking for. If you value connectivity, it’s the Focusrite Scarlett 4i4. If you think beginners should pick the cheapest option, it’s the PreSonus AudioBox.

To help you out, we’ve compiled what you should look out for when choosing an audio interface.

Before you purchase, you need to make sure your beginner audio interface device works with your setup.

Some audio interface devices are only compatible with Mac; others are Windows exclusive. Once you make sure your connection in this department is clear, examine the physical connectivity options.

On older interfaces, you’ll probably find a “firewire” connection. This first popped up in the 80s and is rarely supported by modern computers.

Many types of connection only a decade or less old have gone out of fashion—so the easiest, most up-to-date connection you can get is a USB audio interface. Every computer has at least one USB port nowadays.

If you’re more technically-minded, you may wonder whether it matters if you have a USB 2.0 or 3.0 connection. Luckily, it doesn’t. The best audio interfaces will work regardless of the USB type—albeit at 2.0 speeds if a 3.0 port is not present.

Another modern connection, which came into play in 2011, is the Thunderbolt connection. These exist on current MacBooks. However, audio interfaces rarely have this connection.

If the Thunderbolt connection is all you have, you may want to get a Thunderbolt to USB converter or vice-versa.

Inputs on audio interfaces vary. Ideally, you’ll have at least two—one for a microphone and one for an instrument.

Having a single input is also fine, but won’t be good if two or more people are using the interface to record at once.

Some audio interfaces will let you listen to the sound directly. They’ll feature outputs for headphones or speakers; this is convenient if you’re doing a lot of work directly on the interface. It saves you from having to rely on your computer’s outputs.

The higher the sample rate, the better and more convenient things are going to be.

Sample rates range from 45–192 kilohertz, so it’s highly variable. The lower the number, the fewer audio samples the interface can process per second.

More bit depth means a more dynamic sound quality captured by the device. If you thrive on the small details in sound, then you should shoot for the highest bit depth you can—around 24 bit is best.

Aim for the entire range of human hearing—20 hertz–20 kilohertz.

The best beginner audio interface is the Focusrite Scarlett 2i2 (3rd Gen). It has all the basic features you might desire in a USB audio interface for recording or playing, and they’re very well laid out, too.

A clear layout is vital for beginners, who may be easily overwhelmed by copious lights and clutter like on the M-Audio AIR 192|6.

With a similar look to the overall best, the runner up is the Focusrite Scarlett 4i4. It’s the same device, but with more action input/output wise. It’s a great step up from the 2i2, whether your budget is larger or you’re confident enough to go slightly beyond the beginner level.

And if you don’t like Focusrite as a whole, then the PreSonus AudioBox is the next most simple. It’s also the most inexpensive of the bunch, giving it a leg up over interfaces that are slightly better, but nearly as well laid out.