If you are in a hurry, the best overhead mic for drums is the Neewer. You get two in one, with three polar pickup patterns for a variety of performance and studio needs.

Even so, all of these drum mics are sleek and perform well. They’ll be sure to get you attention for your excellent playing.

The best overhead drum mics are: 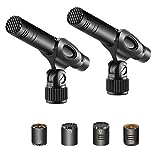 Much of the time, two mics work better than one over a set of drums, which is exactly what Neewer has provided us with. Two mics pick up noise from both sides, giving you an evenly balanced sound.

These Neewer mics are condenser microphones with interchangeable capsules for picking up sound. The settings are cardioid, super-cardioid, and omnidirectional, for a whole range of recording and stage needs. This makes the pair one of the best overhead mics for recording drums.

Both mics are thin and concise, so they aren’t too heavy. Plus, they slot neatly into their included aluminum case. They also slot into most mic stands easily, as they come with 0.63-inch adapters, which is the standard fitting you see across most mic stands.

Point them up or down at will in this moveable fitting to record clear sound, which is aided by the provided foam windscreen. Air can be just as much of a nuisance to a mic as a vocalist’s sharp “P” sound. The screen will prevent the popping and whooshing of air as you play.

They also have a frequency response encapsulating almost the entire audible frequency range. Drums don’t tend to make the sounds of the lowest lows and highest highs, though, so it doesn’t matter if it’s not going down to 20 hertz or up to 20 kilohertz. The mics have got you covered!

With their exceptional quality and features, we consider these mics to be the best drum overhead mics under $500. 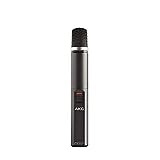 The AKG condenser mic may only be a sole drum mic, but it has quite a few desirable features. With the simple flick of a switch, you can go from cardioid to hypercardioid for a recording or performance scenario.

Whether in the studio or on stage, this drum mic should slot right into any mic stand for positioning over your drums. Both standard and boost adapters are included with purchase, so play away, and don’t worry about the whoosh of your drumsticks, as there’s an included windscreen to keep that at bay.

You can jam at your actual level or make people think you’re even quieter than you are when recording. This is thanks to a -10dB gain switch, which helps you keep your sound subtle when it needs to be.

We particularly like that the frequency matches that of most drums and that it picks up frequencies right up to the highest frequency humans can hear. Some of us can’t hear the high highs and low lows, which is where such a mic can really shine for optimal recording.

Also included is a transport bag so that you can go from place to place to record and jam. 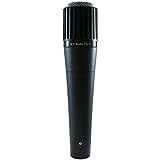 The first and only dynamic drum mic on your list, the GLS mic is perfect for tight budgets. Dynamic mics aren’t the best for studio use, making them cheaper than their cardioid counterparts. Even so, there are many benefits of this mic for drum use.

The microphone features a unidirectional pattern. Looking at the mic, you’ll see it has a smaller area for sound to enter into than the condenser microphones. This means it requires a more focused sound when in use—you’ll definitely need more than one to record your whole drum kit.

Despite its small sound pickup area, the frequency response is fantastic. The mic can pick up sounds lower than you can hear at 15 hertz—your hearing starts at 20 hertz. It doesn’t fare so well at higher frequencies, though, detecting frequencies up to 15 kilohertz. Your ears can go up to 20 kilohertz.

The frequency response makes it great for capturing any sound your drums can produce. Also, if you feel like using it for some impromptu vocals, it’s a fantastic choice since vocalists most often use dynamic microphones on stage.

Whether you use this mic for drum or vocal sounds, it should fit any mic stand and is shaped thinly enough to be handheld. It’s also wider at the top so it won’t slip out of your hand if you hold it upside down. Singing solo aside, it’s a great mic for holding above the kick drum.

Dynamic mics can withstand higher sound pressure than condensers. Utilize this mic for those songs that need that thundering kick.

Overall, even if you don’t want this mic as your main tool, it’s a great add-on to any mic collection.

The Samson C02 cardioid, condenser microphones come pre-shock-mounted. They screw neatly onto the top of any standard mic stand, perfectly poised for all your drumming needs.

The matched pair also comes with a windscreen each to protect the mics from unwanted noise. They primarily come ready with everything you need for that clean, crisp drum beat you wish to perform or replicate.

As you play, the microphones minimize low-frequency noise, but how low they go is unspecified. Although, you can safely assume they pick up anything your drums put out.

These are a fantastic matched pair of microphones for anyone prone to tipping or knocking their mic stand. Since they’re shock-mounted, the mics won’t pick up any of the mic stand’s vibrations. Of course, you can buy a shock mount for any mic, but this pair saves you the trouble.

Types of Pickup Patterns to Know

Unidirectional mics have a narrower pickup area than super and hypercardioids, so they eliminate the most background noise.

These mics pick up sound from every direction, which makes them sound perfect, but they do have a downside. They tend to pick up all the background noise, not solely the desired noise.

The Neweer mics have an omnidirectional setting you can utilize if you ever feel the need. If you decide to go on an impromptu drum solo using a bongo under your seat, the mics will still pick you up as you dance around.

More practically, you could use this setting if you’re using just these mics to record or perform with a whole band.

Cardioid mics pick up sound from the sides and the front, but not the back. This eliminates some background noise, and so they’re great all-purpose mics.

All the mics in our list have this bar the GLS model.

These mics are most sensitive in the front, which helps eliminate feedback and background noise.

They pick up sound from the sides and lightly from the rear, but not as much as the front. This makes them great for instrument recording. You get a taste of all sound coming from the instrument, with most of it coming through the front—it gives it a realistic directional sound.

Their pickup angle is narrower than cardioid mics, giving less room for error and feedback. There are certain deaf spots between the sides and back, which keeps a level of unwanted sound out.

The AKG C1000S is the only product we’re reviewed that has this pattern.

Supercardioids have the tightest angles of all the cardioid mics. The rear is less sensitive than the hypercardioid, but they pick up all the sound you need, with a tiny margin for error. They direct and isolate sound very well.

The supercardioid mics have four deaf points, eliminating unwanted noise further. The front, back, and sides pick up sound with angles of elimination in between. The front also picks up less sound than the hypercardioid’s front does.

The set of Neewer mics is the only one to feature this pickup range on our list.

Condenser or Dynamic Mics for Drum Use

Condenser microphones are the ones you’ll find in studios and are mainly used as drum overheads. They’re the most sensitive mic, so they’ll pick up any sound made. They also have an extremely high-frequency pickup.

Vocalists don’t usually use them because they’re more fragile than dynamic mics, although the GLS model on our list has decent reports for vocal sound.

Condenser mics will pick up even the most subtle of snare snaps. This is great for drummers, as the subtleties of the beat are often ignored when other band members are performing.

These are the best mics for stage and recording purposes, so we’re going to dive deeper into this type of mic.

How Do They Work?

Plates in the microphone are charged by an electric current. This is how the mic gets a signal and recreates sound.

Out of the two plates inside the mic, one is fixed, and one moves. The sound waves hit the moveable plate, which shifts to produce an electric signal. The signal corresponds to the sound the mic is picking up, letting the mic recreate the sound waves put into it.

When powered by a cable, it’s known as phantom powering.

Phantom power is to mics as watts are to amps. An amp will have a certain power requirement, as will the mic.

You can buy the appropriate power supply separately if it’s not supplied. For example, here’s one that’ll work with anything needing up to a 48V supply.

Dynamic microphones are rugged and moisture-resistant. They’re not as accurate as condensers when it comes to picking up sound, and they can go cable-free. The same can’t be said for most condensers.

Because of their weaker sound-pickup, they’re usually used for live performance. In the studio, every noise you make is deliberate, and what isn’t, you edit out. On stage, you don’t have the editing-out luxury.

One thing dynamic mics do better than condensers is withstanding high sound pressure levels. This makes them perfect for guitar-shredding, vocal belting, and kick drums.

It’s hard to shy away from the Neewer pair as the best overhead mic for drums. They have three polar pickups for a range of different uses, and they come in a matched pair, so you don’t have to buy twice. They’re also thin and sleek, so they won’t weigh down your mic stand or clutter your playing space.

Coming in at runner up is the AKG. Sure, it’s only one mic per purchase, but it has two of the best polar pickups for recording instruments.

The AKG also has a particularly useful gain feature that actually decreases your sound rather than increasing it. We all know how noisy drums can be, and this feature stops them from topping out when played. A distorted sound when a mic tops out isn’t pleasant for anyone, and a clean beat is essential when making great music.