The TC Helicon VoiceTone Mic Mechanic 2 vocal effects pedal is a brother of the VoiceTone H1 by the same company.

It promises to fine-tune a mic’s output by making detailed adjustments and tweaks to the overall sound, making your audio its best quality.

It’s an improvement over its predecessor. The main changes are more control of effects such as delay and reverb, automatic gain control, and battery operation, all downplaying its simplicity in design.

What makes the Mic Mechanic stand out is its superior reverb and delay effects for a much-improved sound.

TC Helicon was founded in the early 2000s and acquired in 2015 by Music Tribe. It specializes in vocal effects equipment and is a pioneer of the industry’s advancement, creating several renowned vocal effects units such as the VoiceLive and VoiceTone series.

Here we’re focusing on the Mic Mechanic, and after conducting extensive research, below is our TC Helicon Mic Mechanic 2 review.

Things to Consider Before Buying a Vocal Harmonizer Pedal

If your mic sounds flat, one of your backup singers or guitarists is a no-show, or there’s no unison in your sound, these are all situations a vocal harmonizer pedal can fix.

Besides recording your voice or guitar chords, a harmonizer picks up the melody you input and generates different harmonies at different pitches simultaneously, resulting in an enhanced sound, thicker tone, and the illusion of an additional singer or instrument.

However, if what you’re seeking is acoustics, then a vocal harmonizer pedal won’t cut it. What would work better is acoustics treatment requiring acoustic panels or diffusers.

That said, there are factors to consider when buying a vocal harmonizer pedal, including:

The following are some favorite features and benefits of the Mic Mechanic in our TC Helicon Mic Mechanic 2 review:

This harmonizer has auto chromatic pitch correction, which is great because if the singing is a little off pitch, it’s corrected, improving the performance sound.

On the Mic Mechanic, the auto chromatic feature is on the right of the control knob. It engages or disengages to adjust the pitch balance and applies it to the signal produced.

However, it’s important to subtly use this effect; otherwise, it can warp the audio sound. Interestingly, in modern times the warped sound is considered a good effect, so you might opt to go with it depending on your preference.

The Mic Mechanic pedal has an echo or delay effect (located on the left control knob), which determines the echo applied to the signal produced and adjusts the time between echoes to create different echo styles.

What’s great about the delay effect is that it can enhance the sound, giving it more oomph. For example, it can turn a mono sound into a stereo one.

Another significant effect is the reverb, which is excellent for producing a rich, layered sound generally associated with huge spaces like cathedrals. You can find the reverb effect as the center control knob on this unit, with which you can vary the reverb styles – room, club, and hall, or the level of reverb applied to the signal produced.

The Mic Mechanic also has an adaptive tone effect. It has a tone button located under the control knob, which, when engaged, analyses the input vocal and automatically adjusts EQ, de-essing, gating, and compression. This is great because it improves the sound produced, giving it more clarity.

What’s more, the Mic Mechanic comprises a footswitch for engaging and disengaging the processor.

Also, it has a mic control feature that enables you to control effects directly from your microphone. I appreciate that I no longer have to be next to the footswitch to engage or disengage different functions.

That said, there are only two mics compatible with this unit, but the good news is there’s now an adaptor (TC Helicon MCA100) that can make a microphone mic control compatible. All you have to do is plug it into the bottom of your mic.

The Mic Mechanic has phantom power of 48V, which is excellent because it means not having to carry a mixing board around. I especially like that you don’t even have to turn it on for the feature to work.

It features an XLR mic input and XLR mic output, as well as a USB input, power switch, and power source adapter input.

I scoured the internet and found the following user reviews from others that had the same positive experience: 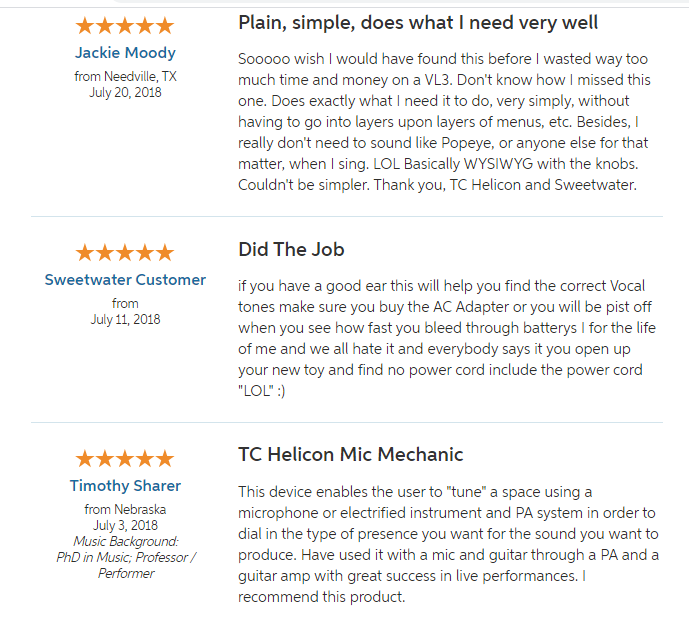 Here we have a few great alternatives if the TC Mic Mechanic is not your style, or available to you:

This pedal has several harmonies and effects and boosts both vocals and guitar. It’s best suited for acoustic performers and singer-songwriters, making a fabulous addition for writing songs at home, recording, or even a solo gig.

If you’re an acoustic singer-songwriter looking for creating the sound of a full band, check this one out for its incredible looping features.

The TC Helicon VoiceTone H1 is simple but lacking effects like compress, tone, or loop. However, it’s a solid, affordable product best suited for live performances.

If you’re looking for something simple and straightforward to use during your performances, this is the pedal for you!

You can’t technically classify the Roland VT-4 as a pedal. Rather, it’s more a full-effects station featuring pitch control, harmony options, and many various effects. It is best suited for a home studio.

That said, it’s not to be underestimated, which is why it made it to the list of one of the best vocal harmonizers.

If you’re looking for a great full-effects station to add in harmonies and other effects, give the Roland VT-4 a try.

If one of your band members is missing, you undoubtedly would like to carry on with your rehearsals or performance as scheduled. Great performance means you sound perfect in terms of pitch, tone, and consonance.

The Mic Mechanic 2, which we rated as one of the best multi-purpose vocal effects pedals, has a chromatic pitch correction feature enabling you to adjust the pitch issues and improve note accuracy, thereby significantly improving your sound quality. If this sounds like something you’d be interested in, check it out along with a list of its features here.