Electronic instruments have improved substantially since their inception. They’re no longer an enormous breakthrough in modern music; this lets them be more affordable, even on the tightest of budgets. You can get the an electronic drum kit under 1000 dollars, no problem.

Here is the list of the electronic drum kits under 1000 dollars we reviewed:

Reviews of the Electronic Drum Kits Under 1000 Dollars

Alesis’s Turbo Mesh Kit has outstanding quality and is the best electronic drum set for the money. Aluminum rack and authentic feeling drum heads, and almost all the necessary accessories.

First of all, the drum pads are mesh. Rubber is typically used in more inexpensive sets, but mesh is better. It’s also quieter, so your practice (lacking headphones) will be almost silent. The mesh heads deliver a realistic and responsive feel, like an acoustic drum set.

The sounds the pads keep silent are high-quality and high in number. There are 10 drum sets to play with, 30 play-along tracks, and over 100 sounds to be made, each of which is expertly curated for ultimate realism.

Thirty play-along tracks are there to help you learn, making this set perfect for beginners, and the aux input lets you connect to a phone or tablet with the Melodics app for 40 bonus lessons.

This kit is like the budget version of one of Alesis’s best sets, the Nitro Mesh Kit, the same quality, but with fewer features, for tighter budgets.

Further greatness for beginners, you get sticks and all the necessary cables included with your purchase—no need to buy extras in that department.

Sadly, you don’t get a stool. You’ll have to buy this separately, or use a less impressive regular old chair—its quality makes up for it, though.

This Alesis drum set is a lot like the last. Only it has one more drum pad and a lot more sounds and lessons. It’s an excellent set for beginners and older players alike.

As the name would suggest, the drums and cymbals have mesh pads for a quiet, authentic experience. You can play 40 different drum kits across them, with over 350 expertly curated sounds within them.

If you don’t know how to play yet, there are 60 play-along tracks, a sequencer, and a performance recorder. Play, record, and see how you’re improving. There’s also an aux connection for phones and tablets, for lessons in the Melodics app.

You get all the cables you need included with this kit. This sturdy, aluminum-framed drum set is ready to guide you into becoming a drummer extraordinaire.

Roland has several entry-level electronic drum kits, and this is one of them. The TD-1K has an advanced sound engine and is top of the line.

The drum and cymbal heads are mesh, for a realistic feel and minimal sound. The drum sounds themselves are easily swapped out with a simple interface, and the LED display has a clear layout for hassle-free use.

This set is very compact, and it’s not too heavy, weighing just over 25 pounds; that makes it quite portable and should fit in even tight living situations. You can haul it back and forth from room to room, the stage, or the studio relatively easily.

Admittedly, there aren’t as many sound options as some sets on the market. There are 15 sets to work with, so you get some variety in there, and you have the option of recording these sounds on your computer with ease, using a USB MIDI cable.

There’s training software if you’re a beginner or need to brush up on your technique. You can install and use it on your computer if required. 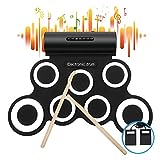 If your budget is almost non-existent and you’re in need of some percussion, this is the set for it. It doesn’t resemble a drum set in anything but sound. It’s compact, laid out in front of you, resembling a toy.

It’s an incredible kit for kids. It’s easy to play, hard to damage, and inexpensive. So if it breaks, you’re not out hundreds of dollars.

This small set lets you practice via the built-in speakers or through headphones, wherever you go. It has 10 hours of battery life and is portable. Play in the car, on the bus, wherever. It rolls up and fits in any bag while still supplying realistic drum sounds.

Due to its small size and simple nature, the set and sound options are limited. It’s just a simple drum kit in a roll-up package. Excellent for a solo musician who wants to play some simple beats for a song, without the burden of an entire drum set. 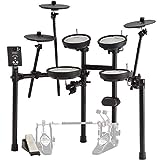 Here’s another entry-level drum set from Roland, with an extra drum and better pad material in places. Like the last one, it has some coaching functions, only this time they’re onboard the set. They let you track your progress and get motivated.

There’s smartphone connectivity to utilize, too, so you can learn, monitor, and progress even further.

For those who can play already, the pads have mesh heads for silent practice and an authentic feel. There’s also tension adjustability with them, so you have more control over how everything feels.

The 15 preset drum sets have plenty of variety to play with, and you get 256 notes of polyphony. It’s easy to get things up and running, and the kit is compact so you can move room to room. Brilliant for a beginner performing for parents and peers, equally apt for a pro wanting to jam with friends on stage.

Yamaha makes everything and has an aptitude for technology, so it’s no wonder there are Yamaha electronic drums. They’re surprisingly affordable for a set from such a well-known, trusted brand. Although they’re the first in this list to come without two pedals, the kick pedal is not included.

There’s a bundle for this set, which includes a drum stool and the second pedal. However, it’s unavailable at the time of the review. Keep an eye out for that if you want this set.

The drum set more than makes up for the missing pedal with its other offerings. It provides almost 700 unique drum sounds to play with across 50 drum sets, plus Yamaha’s special silicone pads to recreate the feel of acoustic drums.

You also have layer and import options with this kit; make your sound stronger, grab music you’ve made elsewhere, and play along. You can also record songs right on the set.

The importing is done through a free iOS app, MusicSoft, on an iPhone or iPad. They also let you customize your sound. That’s the kind of advanced tech you’d expect from a company like Yamaha, and it makes the somewhat high price well worth it, all while still being within your 1000 dollar budget.

If you liked the last Yahama set but didn’t like the missing pedal, this one comes with both of them. There’s also a package available with a stool but for a slightly higher price.

At the cost of the included second pedal, though, you’re missing a few drum sounds. You still get a whopping 415 of them, but it’s a step down from almost 700.

These sounds come from 10 drum sets. You also have 10 songs to play along to, and 10 training functions for beginners or people wanting to brush up.

As well as that, you still have the smartphone connectivity of the last set; only this time, it’s on both iOS and Android with the apps “DTX402 Touch” and “Rec’n’Share,” respectively.

There’s also MIDI connection to a computer, phone, or tablet via a USB cable. Excellent for recording and connecting with other instruments and sounds. Truly, an excellent set with all the pedals and plenty of sounds.

What to Consider When Buying Electronic Drums

If you’re new to electric drums, or even drums in general, here’s what you should look for in the best electronic drum kit under 1000 dollars:

Any kit without these essentials is one to avoid unless you’re willing to go without and on an extreme budget. Some parts you may be able to buy separately later, though, so don’t fret too much.

With these essential components, there are things to look out for to make sure they’re top-notch.

If you look after your set, the pads should last no matter what they’re made of. But different materials will feel different to play, and that can make or break a set for some people. There are some other factors, too.

Most budget sets will have pads made of rubber. The feel will vary depending on the type and thickness of the rubber used. However, rubber is usually the hardest material pads are made of—rubber sets will also be the hardest on your wrists to play.

Some drummers think rubber feels unnatural to play on. As well as this, rubber can look cheap on a set. That isn’t a huge concern unless you’re trying to look flashy.

Rubber is also louder to play on; the noise level won’t be extraordinary like an acoustic set. It’s something to be mindful of—rubber pads work wonderfully but may not be the best choice for apartment living, or living with family who dislike drum noise.

You’ll find mesh on more expensive drum kits. When made right, it’s said to feel more like an acoustic set. Sometimes mesh is made too soft, though, making it feel like drumming on a trampoline.

The feel varies depending on how tight the mesh is pulled, or how worn it is.

Mesh is also better for quiet playing. It’s soft and fabric-like, so it absorbs sound better than a hard rubber would. Higher fabric density is better at dampening sound.

Some sets will have specially designed drum pads. They’re made to feel more like the real thing. Roland, Yamaha, and Alesis all make their own heads with some sets—like the Roland V Electronic Drum Set (TD-1DMK) and the Alesis Drums Nitro Mesh Kit—and they certainly have the feel element down—but due to their likeness to acoustic drums, they may be louder to play.

Your drum pads will most likely be attached to the frame, so you can’t replace it if it doesn’t hold up. Make sure the frame is solid and strong enough to withstand some wicked hits. Drumming can get heated, so don’t let the set collapse under the weight of your rock ‘n’ roll attitude.

Your sound is fully digital, and people need to hear it. Make sure the set has the right inputs/outputs so they can.

It’s also possible to connect headphones to an amp for practice if your set doesn’t have the necessary output. However, most headphones will need a ¼ inch adapter for this.

A computer connection isn’t vital in a drum set, but it’s useful in many cases.

Drum kits are multifaceted beasts sometimes. You have the ability to trigger other instrument sounds using them via a computer. If you’re a solo drummer who likes to play along to your own music, this could be an excellent feature for you.

These days most computer connections are made via USBs. So, your set and computer may not have a MIDI port, which was a long-standing standard—it still is, much of the time.

So just because your setup doesn’t have any dedicated 5-pin MIDI ports, you’re not lost. See if your set has a USB connection, like the Alesis Drums Turbo Mesh Kit, which has a USB MIDI connection.

The best electronic drum kit under 1000 dollars is the Alesis Drums Turbo Mesh Kit. It’s simple, compact, affordable, sturdy, and has excellent pads. It’s great for learners and long-time players, with materials to help you learn the instrument.

The Alesis Drums Nitro Mesh Kit makes for a great runner up. It’s not as compact as the Turbo, but it has even more sounds to play with and lesson functions.

Alesis has done itself proud with these two incredible electronic drum kits.